I know that it is only post two, but it has always been my habit to either sprint as fast as a cheetah (a disabled cheetah) (with its legs tied up) (…and dead) (edit: as fast as a cheetah in theory) away from my feelings or dive headfirst into them so much so that the other person turns into a cheetah.  So while you may be taken aback by my already addressing you as beloved, know that I could not help it.  Because last week, something startling and altogether wonderful happened: people read this.  Like…more than three of you!  Both unruly youths and, thanks to my pop, the middle-aged–a demographic I was born to grow into.  It was truly delightful.  And it touched me, in a very overdramatic way, so I had no choice but to whip out the ultimate endearing adjective as early as post two.  But let us begin.

We are gathered here today to reflect upon an incident whose one year anniversary passed just a few days ago.  It was summer.  I was 19 years old, brimming with youth and naivety, and on the lookout for any way to get out of getting a real job.  So when a family friend offered me the opportunity to watch her dog for two weeks, I pounced on it.  The duties were simple enough: walk him, feed him, take him outside to crap.  Why was this job taken by me and not a 10 year old?  That’s not important.  I loved the lady, I’d watched her dog before, and I was thrilled to be doing it again.

The family had just moved into a new house, so before they set off for Mexico, the mom showed me around the new place.  She loved her dog, Boston, with all of her heart, so her priorities went beyond the basics of dogsitting and housecare.  She just wanted me to spend as much time with him as possible.  So she gave me all the deats.  She showed me how to work the cable, said I could record shows, and even told me I could bring a friend over and spend the night.  She was like a second mother to me, except we weren’t as close and she was less perverse than my real mom.  Anyhow, there was a hammock in the back and Reese’s Cups in a bowl on the counter, and it was something of a paradise.

I settled into my new role quickly.  Almost alarmingly quickly.  I would be a good identity theft.  I went there multiple times a day to take care of Boston, taking him on long walks, bagging his crap, and scratching his neck until my arm was tired.  I pampered that dog.  But I also pampered myself.  I watched the Food Network many a times in that home on a couch that had instantly become my favorite.  Boston was the best to talk to during my watching sprees.  I’d ask him what he thought about Diners, Drive-Ins, and Dives, and when I looked into his eyes, I swear I saw nothing, but sometimes that is the best thing you can ask for in a companion.  I sang a lot too, practicing horrendous renditions of songs from Grease, but Boston never told me to shut up.  Partially because he wasn’t actually physically capable of doing so, but more so because we were homies.  Every now and then my friend Nicole came over too, and we’d hang out with Boston outside; her standing in the yard, me hogging the hammock, and Boston neglected in the corner.  We deemed it our vacation home, and between that hammock and those Reese’s Cups, I was living the dream.

Now, there was also a neighbor who’d drop by named Jean or something.  I can’t remember if that was her name.  Also if it was, I should probably protect it, so we’ll call her Bean.  Anyway, Bean was going through a hard time, so seeing Boston cheered her up and kept her busy.  She fed him in the morning and sometimes at night even though I was supposed to, but she always left a note, so it wasn’t a big deal.  I think we were both giving him treats too but I’m not sure how many.  Needless to say, Boston was eating good!  Ha-ha-ha!  He threw up once or twice by the fireplace but I cleaned it up no harm no foul.  Or so.  I thought.

Anyway, things with dogsitting Boston were going splendidly.  I was getting a lot of exercise from walking him, all the extra vitamin D had improved my disposition, and the house was in tip-top shape.  I’d been keeping up with watering the plants, bringing in the mail, and locking up.  The only questionable thing that I’d done was some damage to the Reese’s supply.  But other than that, I was really proud of myself.  Two weeks had passed right on by, and I had only a morning and an afternoon left.  What could possibly fall apart in an afternoon?  The answer is everything, my friends.  Everything.

I remember that day like you remember accidentally finding a bee in your soda (also happened to me, age 12).  I walked into the house and let Boston out.  This was my last visit before the family came home.  I straightened up the things on the table, watered the plants one last time, and then did my usual daily house check to make sure that Boston hadn’t pooped or peed anywhere.

And that is when I found it.

I went upstairs and looked into the bonus room.  Remember how cute it was that Boston was eating well?  Well, as it turns out, he was not eating well.  He was eating something very unwell.  Because there were orange stains everywhere.  Like, Six.  Orange.  Stains.  Vomit stains.  Oh no…  And why were they stains?  Oh no!!  Because he ate it again.  How did he even eat this much?!  I kept thinking to myself.  And that’s when I realized.  The bastard hadn’t eaten that much.  He just threw what he did eat up, and then he ate it back up, and then the fricking meatloaf moved to a new spot where he threw that up again.  SIX TIMES.  But ohh, no no no, that’s not all.  I guess being sick enough to puke everywhere was not enough to curb Boston’s appetite.  Because he did not just eat the vomit.  No, my friends, that just wouldn’t do.  He ate the carpet.  HE ATE AN ACTUAL HOLE, IN THE ACTUAL CARPET.  You can clean vomit with, I don’t know, Windex or some crap.  YOU CANNOT WINDEX AN ACTUAL HOLE IN AN ACTUAL CARPET. 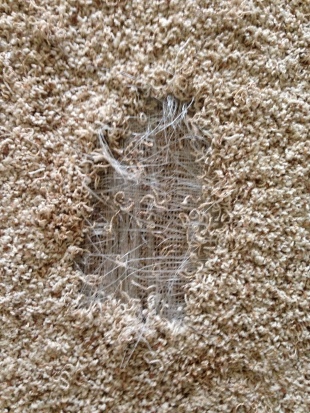 So I did what any responsible dogsitter would do.  I freaked the piss-shit out.  I ran downstairs, and looked under the sink frantically for some kind of a stain remover, and I grabbed the best looking thing and a bunch of paper towels and started scrubbing at those vomit stains with a purpose.  Bean, I thought.  This was all at the hands of Bean.  I didn’t want to hate her but I needed somewhere to direct my panic and rage.  How am I going to tell them?!  The paper towels were no match for the caliber of puke stain and kept flaking off into little bits of balled up damp paper, now too stained orange, with flecks of dog treat in them.  A metaphor for my life.  “Why now…why today?  IT WAS THE LAST DAY!”  I shuttled between the paper towels and the vomit stains, not knowing exactly when they’d be home.  Time was of the essence.  I made my way over to the gaping hole in the carpet, and like a jackass started putting the pieces of carpet shrapnel back into the hole like it would fill it up.  “WHY, BOSTON, WHY???”  The panic crept back into me as I realized I still had to alert the family.  Just pretend…  “No, Melanie, you have too much integrity for that.”  The panic rose as I thought about monetary compensation.  Would I have to pay for this?  Why didn’t I get a real job?!  I’ll tell the son…I’ll text the son…  I often turn to comedy in times of turmoil, half on purpose, half on accident, without much discretion.  So, what I sent was a panicked description of a scene of war and pleads for mercy, in all caps.  After I sent it, I thought, I’m a moron, and continued to panic.  “Why did I eat all the Reese’s Cups…Is this because of the Reese’s Cups?!” I called to the sky, remorseful, but not that remorseful.

Once I finally realized that there was nothing else that could be done about the hole, I inspected every corner of every single other room like no dogsitter has ever inspected before, to my knowledge.  The verdict: everywhere else was clear.  At least the damage was limited to one room, I thought.  I then went downstairs and looked to the back door.  Claw marks.  Boston had been scratching the whole time.  I looked into his eyes and knew it wasn’t his fault–he had tried to escape with dignity.  IT WAS BEAN’S FAULT!  “It wasn’t Bean’s fault.”  It was no one’s fault.  And yet, I knew this was the end of my vacation home dream world.  Defeated, I straightened up the downstairs as best as I could to distract from the fact that a vomit bomb had exploded in the bonus room just upstairs, and then I said my farewells to Boston for the last time.  “It’s been real, buddy.  I hope you feel better.”  He died from fiber poisoning later that night.  (Jk.  He was fine.)

Denoument:  In the end of it all, my non-consensual second mother was very understanding, and repeatedly stressed the fact that it wasn’t my fault, but I never dogsat for the family again.  I wasn’t paid as much as usual that summer, but since I didn’t have to pay for the carpet, I felt it a blessing.  Plus the son said he laughed at the text.  So, even though in one short incident, my credibility not only as a dogsitter, but also as a housesitter, was catapulted into the fiery pits of hell, that was a win.

But anyway, it’s late and I’m tired, so let’s wrap this up.  Morals and lessons.  What did I learn?  Panic, Windex, and laughter are life’s cure-all’s.  And never trust a Bean.

I know it’s been a long one, so thanks for sticking around.

P.S. I didn’t forget about the gnat.